(Begin here to read about how everything magically fell in place.)

Whenever something big happens, for good or not, my anxiety tends to ramp up. It's a perfectly normal response to excitement so I'm used to it. I was even amused when I woke up at 2:30 am, shook Adam awake and said, "What time is it?!" fearful I had missed the alarm and my plane.

My husband. He's a good sport.

Needless to say, I did NOT miss my alarm or plane. I was up, dressed and out of the house before six am. I made sure to reward myself for my prompt and early arrival: 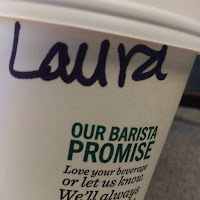 Cute story: When I was in line at Starbucks, a mom and little girl were in front of me, chatting away in Sign. I know a few baby signs and couldn't make out anything they were saying but, "Can I have this donut? How about this candy? Or this?" and "No! It's too early for junk!" are conversations that would never need a translator!

My flight from KC to TX was on-time and smooth flying. I read The 100 on the plane and really enjoyed it. It's different from the TV show; enough different that I can't compare the two except to say that if you like one, you will like the other. The flight from TX to NYC was a little bumpy and I learned an important lesson: If you have to pee in TX, don't wait until NY to find a bathroom!

(Adam: You know you can pee on the plane. They do have bathrooms.
Me: I didn't want too! I was by the window and didn't want to climb over people!
Adam:  It's better than peeing on them!)

For the record, I did NOT pee my pants. I just had trouble finding a bathroom when I got to NY and my bladder was not happy.

So. Enough about that.

People say NYC smells funny and I suppose it does. It defiantly doesn't smell like where I live in KS, which, at any given point, could smell like skunk, pollen or people grilling. Mostly it smells like nothing at all, a generic nothingness as if the entire county has been detoxed of any identifying odor. But the city smells like so many things, mostly like my childhood. In a way, it smells like Nana, my aunts and my cousins and so many fond memories of visiting them

And it's loud. So loud! I'm sitting in my bedroom now and it's too quiet. The city never really sleeps and I remember the sounds soothing me when I spent the night at my nana's.

I felt pretty slick taking car service by myself to my cousin's. I mean, ignore the fact that she arranged for it. The driver was really nice and told me he once owned his own company doing embroidery on shirts and jackets for places like Hard Rock Cafe, Disney, tourist shops, etc. It was fun to chat about colors and logos and such with him.

My cousin! Ack, my older cousin and my plus one for the evening! It was so amazing to see her and my aunt. I haven't seen either of them since my uncle's funeral two years ago. My cousin cooked dinner, we walked the dogs and caught up on everything and I got a shower in my aunt's new shower that looked exactly like something out of a "bold look of Kolher" commercial. It felt even better, as if I was bathing in sunshine and rainbows. I'm moving in, just for the shower.

I have one living grandparents, my father's mother that we call Nana. All of us- her children, in-laws and the grandkids- would do anything for Nana. She's an enigma. You do not cross Nana and if you gain her favor you get Spaghetti Pie and cookies from the Italian bakery.

Ah, who am I kidding. She bring us cookies in the white box with the red twine no matter what!

My cousin and I took the afternoon to visit Nana. She ordered real NY pizza and I had two slices and it was .... heaven. It was storming outside and another cousin told me I brought the mid-western weather with me. I agreed and he said he was going to throw me outside to sacrifice me to the weather gods. He was kidding. I think.

Lunch with Nana was too short. Most of the time, I'm okay living where I do and I do love the life I have in the midwest. But it's times like that when I wish I was closer and I could have pizza and cake with my nana more often. I wish my children could visit the city like I did and have memories of playing in a pool in a small, cement backyard with astroturf grass. Many times during the trip I reminded myself to make sure I bring the kids to NYC to visit.

Okay, enough about memory lane. After lunch, it was time for... the subway.

Now, when I was younger and we were visiting Nana, my father put the FEAR OF GOD into me about the subway. I have no idea why. He never took us on it. We were too young to go on it with even our oldest cousins. We didn't live in the city. A few days before I flew into the city, I mentioned to Dad that my cousin and I were taking the subway to the book launch and he was all ZOMGOSH NO SUBWAY.

Of course I had to send this picture:

With the caption, "I'm on the subway!"
Then I sent this: 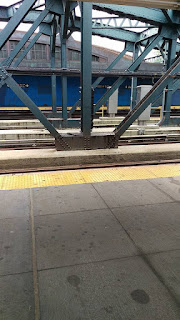 To prove I was getting ON THE SUBWAY and not just standing on some dirty old street. Look, I might be 35 and have four kids but I'm never too old to drive my parents crazy.

Oh, and the subway? So not scary. Okay, the stairs were a giant pain. I was sweating and my thighs were burning by the time we were done. It's because I'm from the midwest and everything's flat. I joked that I had altitude sickness by the end of it. I was hot and sweaty and UGH. But stairs aside, it was FINE. I mean, yeah it was kinda dirty and it smelled funny but as long as you don't sit in any wet spots, you're good. As my brother-in-law's friend said, "If it smells funky, find another car." Wise words, that.

We finally ended up in the DUMBO area of Brooklyn. I took many random pictures, just to show the kids the different landscape and how close we were to the water, trains, etc. 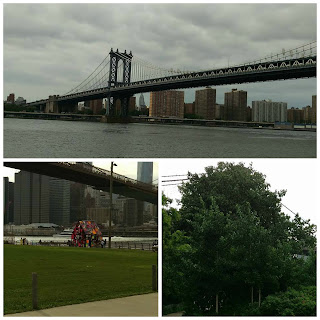 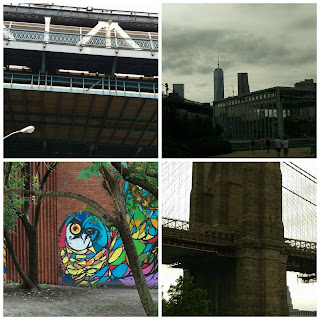 We even rode the Carousel! It was $2/ person and so fun!

I think we spent a good thirty minutes just hanging by the water, talking and admiring the building. Admid the hustle and bustle of the city, it was so calm and peaceful. I told my cousin it felt like home, like every good childhood memory I have of visiting my cousins. I can remember waking up in the car and being so excited to see the bridges because I knew we were close to Nana's.

But then it was time to mosey back and get ready for the launch.

(You seriously thought I could make this one post! HA! Stay tuned for more fun!)
Posted by Laura at 12:03 PM

Please contact me at waldenmommy (at) gmail (dot) com