"You have no idea how nastier I would be if I were not Catholic. Without supernatural aid, I would hardly be a human being." Evelyn Wagner 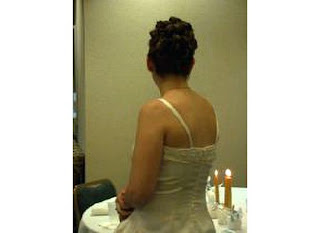 On April 20, 2002 this grainy photo was taken. I was the bride, getting ready to marry my (almost!) husband.I could sing platitudes about how he is my handsome prince, my soul mate, my darling. And, well, he is but we aren't like that.
Our story really begins in June of 1995, when we were fifteen. My family was living in South Korea, where my father was stationed with the United States Air Force. At the time, they really thought North Korea was going to attack South  Korea and that all the dependents would be evacuated. Then- president Bill Clinton called the DMZ the scariest place on earth. The president of NK was threatening to turn Seoul into a sea of fire. My parents were very worried that my siblings and myself (14, 10 and six) would be put through a very scary, urgent and tramatizing evacuation.
So we left the country.
My father had a conference in Maryland and my mother, a civilian working for "social services" in the military, had one in Texas. They couldn't leave us in a country that was about to go to war, so we went with Dad to Maryland. My mother joined us a week later and together the five of us played tourist around Washington, DC.
One very hot day in June, my mother, siblings and myself were standing in line at Mt. Vernon to view the kitchens. My brother and sister were complaining about being hot and bored and my mom was trying to shush them. A blond woman turned around and said, "Oh, don't worry. I have three children too and they're complaining about the heat."
"Yeah," joked a younger boy," but we're from Kansas and we're sure it will be too cold to go swimming when we get home!"
"We're from Korea," my mom said and I left, laughing at the look on their faces.
I headed off to stand under a tree, where an archeological dig was going on. A sign said they they had found household trash and a plate with "Gen. Washington" engraved on it. I felt someone come up behind me and say, "Oh, look. A trash pit."
I almost blew him off.
But I didn't.
And the rest, as they commonly say, is history.

One year and fifty-one weeks after our wedding, Joseph Andrew was born. Our oldest is a joyful, strong willed, Type A oldest child being raised by two oldest children.
His sister, Camille, arrived 21 months later. Like her big brother, she's a chatterbox, a wonderful princess and has a mind of her own. Two years and on KU basketball championship later, our third child was conceived.

George David was due on Christmas Eve, 2008. On the night of Nov. 19, at 35 weeks exactly, my waters broke. We went to the hospital and I was induced. Like his older siblings, he was an unmedicated natural childbirth.  Although big for his gestational age, he suffered from RDS and couldn't breathe. The NICU transfer team was called and he was intubated, given surfactant and transferred to a Level III NICU.
Ten hours after I had my baby, I walked out of the hospital with empty arms.

Nine days later, he came home. But the NICU never ends. He was left with developmental delays in speech that still persist. I was left with Post Partum Depression and Post Tramatic Stress Disorder that persists to this day. The first year was hard. 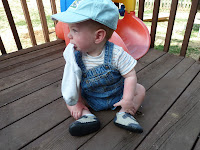 Just as it was ending, we learned Cole Robert was on the way. Georgie was nine months old and I was pregnant again. Our little bear was born in the spring of 2010 and life has been insane and awesome and insanely awesome since then.

Aside from being a wife and a mom, I am a former military brat, distance freestyle swimmer and Roman Catholic. I have an unholy addiction to plain, unsweet tea, carbs, dystopian literature and Doctor Who. I spend most of my days writing, embarrassing the snot out of children as I rock out to Katy Perry in the car-pool line, making hats for NICU babies, writing and reading. I hope to publish a novel someday... soon!

I am an Independent Consultant for Thirty- One Gifts and write for the Natural Parents Network.

I am linked up to Catholic Mothers On-line.

Please contact me at waldenmommy (at) gmail (dot) com